So you are thinking about buying Canon 7D? 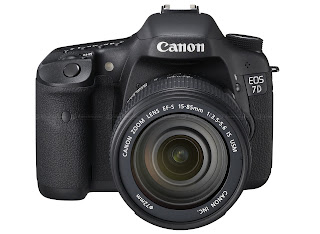 Reasons that I thought about buying…
Canon is a strong brand. I had a Canon film camera and I also bought a Canon T2i (now upgraded to a T3i) years ago when I got back into shooting.  I had friends who got the Canon 5D Mark II (now upgraded to a Mark III) and I wanted one.  The things that were really important to me were the mega pixels, and the ability to shoot video.  The pictures per second, the crop factor…although there were benefits, I didn't really understand them fully at the time. I also knew that the camera needed good lenses, and I couldn't afford both the 5D and some good lenses.  I knew that I wanted high quality glass, probably a 24-70 2.8 and a 50mm 1.4.  My main focus was going to be shooting stock photography of common things.  I knew that I wanted to shoot some landscapes and shoot portraits.  For video I also wanted to shoot stock video of locations and people.  And of course, I wanted to capture all the school activities and cheerleading of my girls.


Here is what I actually use it for.....
I started down the path of shooting stock photos.  After getting into it, and shooting several things, I found that there are a lot of rules about shooting stock photos.  And this is a club that other photographers do not necessarily want new members.  This is pretty typical though.  I shot outdoor landscapes and took it to shoot cheer competitions.  I had shot with a Sony HD Camcorder in the past which always left me frustrated with the quality of the picture.  I bought the Canon 50mm 1.4 lens first, thinking that the light sensitivity would allow me to get more great shots even in poor indoor lighting.  The camera with this lens, performed really well in low light, but shooting outdoor landscapes with a lot of light did not give me the flexibility that I thought it would.  And the inside cheerleading shots, while much higher quality than the Sony, forced me to have to pan back and forth even when sitting at the very top of the bleachers.  I think the biggest problem for me, even now with DSLR shooting is focus.  Getting focus to happen fast and accurate is an art form.  It takes lots of practice and you need the right tools that I didn't originally have at the time.  I have taken a lot of photos as well.  I have used the on-camera flash for some of them.  I liked the fact that this camera had a flash for those moments that you want to treat it like a point and shoot.  Since I was determined to make good photos and good videos, the cheaper price on the camera allowed me to add more things to it later on.  And with the firmware update that was released, some of the audio missing features are significantly better now.  I have shot a lot with this camera.  It has performed well even in extreme conditions.  I have shot in brutal Utah cold, humid Oregon coast, hot southern Utah.  I have never dropped it in water, unlike the zoom audio recorder and a flash, but it has gotten slightly wet at times.


Here are the things I didn't expect or didn't like...
The crop factor of the camera with the 50mm lens was narrow.  I hadn't done the math to realize that 50mm meant it was really a 80mm lens.  I didn't realize how much I would have to move back to shoot any people or things.  Don't buy a fixed lens for your first lens. A lot of people really like the 28-104 f4.  I bought a 24-70 2.8.  It has been a great lens. Shooting photos in almost any condition with the a lens like this is great.

It took a lot of work to figure out how to best focus.  If you get used to looking through the viewfinder with photos and setting focus, when you are in video mode, the viewfinder is obviously blocked by the mirror so you have to use the video screen to check focus.  Doing this is almost impossible without digitally zooming in.  Which means following and changing focus is impossible without adding other viewfinders or bigger screens, or magic lantern firmware on. There is no autofocus while recording unless you like your video to look weird while the lens searches for focus in the middle of a shot.

The on-camera mic is not bad if you don't care about quality audio.  If you do care, you are going to have to get some sort of mic, or mic's to go with the camera.  The AGC, or Automatic Gain Control, tries to get the most signal and compresses the sound to raise it to a level without clipping.  For someone who just wants to shoot without worrying about the audio, this feature can come in handy.  For someone who wants to get the best quality audio possible, not so much.  If you upgrade to a mic, you will hear the difference.

One of the features that this camera has is micro focus adjustments.  I found that my 24-70 lens wasn't tack sharp in a lot of my photos.  At first I thought maybe it was camera shake or just me doing something wrong.  After much research, I found that some combinations of cameras and lenses can be off just a bit when focusing.  I used this feature to have the camera recognize this lens and automatically adjust the tiny amount required to get accurate focus.  If you are going to be using lots of different lenses, this is a very helpful feature.

Moire patterns are something that I didn't really understand in video.  Wow, do they become bad news. I shot a training video where I had a shirt with horizontal stripes.  I was shocked when every subtle movement became a huge distraction.  I went to my friend Google to find an answer.  Turns out the only answer is to blur the crap out of the video - kinda pointless if you are trying for something sharp.  Problem is, you don't really have any control of them, it's because of the sensor.

Here are the super cool things that I love about it...
If you are going to get serious about shooting video or photos with a DSLR, you can't go very wrong with any of the Canon's.  While some have more features to enable you to extend things even further into some creative areas, the thing I have enjoyed about the 7D is it's modularity.  I have been able to get into slowed waterfall types of shots, astrophotography, HDR photos, night time video, wireless audio, sports photography and sports video, multiple flash types and sizes for all types of shooting,.. the list goes on and on.  The lenses that are available hit every price point and every feature.  And glass doesn't lose value.  There will always be upgrades, and more features that everyone has to have, if you can afford it.  For me, this has been a great camera and a great bunch of shots.